Anybody who knows me knows that I am a big baseball fan in spite of my Beloved Seattle Mariners breaking my soul again and again with a now-Major League-leading 17-straight non-playoff seasons.

And to rub salt in that wound, that playoff-less streak is not only the longest in baseball, but also the longest in all of the four major North American pro sports leagues–MLB, the NFL, the NBA and the NHL. Even the Cleveland Browns, who went 0-16 in 2017 season, have been to the playoffs more recently than the “Awesome M’s”, as I frustratingly refer to my team. (Although the Browns don’t have the Mariners beat by that much. They were last in the playoffs in 2002.)

Whatever. Opening Day is just a few days away for the M’s. Actually, the M’s had their first Opening Day last week in Tokyo, where they took two-of-two from the A’s and the room got VERY DUSTY here during what turned out to be Ichiro’s final Major League game. I have already told (warned) my wife and daughters that, thanks to MLB.com and Apple TV, come 7 p.m. Thursday night, our new, 58-inch Samsung will be showing the Mariners season opener in all of its 4K/Ultra Hi Def glory and there WILL NOT be any changing of the channel while the Mariners game is on. Besides, they all have iPads they can playing drawing games on, anyway. Let daddy have his opening night of Mariners Glory. There will be 161 more games this season you can interrupt.

The Mariners don’t make their first trip to Oakland, where I live, for three games against the A’s, until the fourth week in May. And although I want the A’s to do well, there is no doubt where my loyalties will lie. There’s a reason why I have a Mariners logo tattooed on my upper left arm: Because I care. Probably too much, but again…Whatever.

In addition to Mariners baseball, another thing I care about deeply is breakfast. I make 96% of the breakfasts in our house for one simple reason: I’m good at it. I use a cast-iron skillet for most of the cooking and when I get an idea for something in my head I don’t suffer easily anyone asking for anything different. Tortillas, cheese, bacon, a couple of eggs: There’s your breakfast burrito.

But, with two daughters who are 8 and 10, and who typically ask for 17 things, then eat maybe two of them, you can probably imagine how well I am able to stick to my no-changes-in-daddy’s-plans meal philosophy.

Yet, breakfast is still awesome and so is baseball, but rarely are the two thought of together. That’s because, Boston’s Patriots Day game aside, nearly all Major League games are held in the afternoon or evening, long after you’ve put the Honey Nut Cheerios away. And that is a shame, because I have thought about all the different things that you can have for breakfast, and how the best of the bunch actually looks like a pretty solid batting order of a menu.

So with that, let’s look at The Ultimate Breakfast Baseball Lineup.

You want your leadoff batter to be someone who can take a few pitches, assess the pitcher’s stuff and get on base. And it helps if they are loaded up on something like caffeine, or in the case of the Cap’n, sugar. Crunch Berries have everything you want in a cereal: Color, a crazy-looking Cap’n for an icon and plenty of sugar. Let them soak in the milk for a couple of minutes and you are on base.

Donuts are one of those foods that never disappoint. They are never bad, and when they are great, they can be awesome. Kind of like 1972 Oakland A’s No. 2 hitter, Joe Rudi.

Now we start to get in to the “meat” of the lineup, so to speak. Your No. 3 hitter should

have some power, yet can hit for average and always come through in a clutch situation. That is bacon. There is no question that bacon is the Greatest Food Man Has Ever Created. Add bacon to anything and it immediately becomes 4,000% better. And when you cook bacon and that delicious aroma lingers in the house for hours afterward? Better than sex, and safer, too.

About three years ago, my family and I made our annual trip back to my home stomping grounds. At that time, my mother suggested this “silver spoon” place she had heard about. It turned out to be Marcia’s and my breakfast-loving life has never been the same.

I want to you think about this very carefully: A Chicken-Fried Steak Omelette. It is exactly what it sounds like. A Chicken-fried steak enveloped in a three-egg omelette and covered in homemade gravy. Oh, you’re not impressed yet? Well, there is also bacon stuffed inside the omelette blanket. Did I mention the gravy? So, so much gravy.

Just hearing about that should make you have the same reaction I had when I tried my first bite of this plate full of awesomeness. I stopped for a moment, closed my eyes, and I almost cried as I thought, “Thank you, God, for making me an American.” It is because of things like Marcia’s Chicken-Fried Steak Omelette that the terrorists will never defeat us. It remains the greatest breakfast I have ever had and I have already marked my calendar for my next visit to Marcia’s this summer.

(4b. Regular Chicken-Fried Steak With Gravy)

If you can’t get to Marcia’s, then the next-best option is chicken-fried steak and HOMEMADE gravy. [And you should have hash browns and scrambled eggs with your CFS, as well]. There’s a reason why the No. 4 batter is called the Cleanup Hitter: His job is to go deep and bring everyone home. Just like the Boomstick himself, Nelson Cruz. Everyone loves fried chicken. Everyone with a brain loves steak. There is nothing ever bad about frying a hunk of steak like a chicken and slathering it with homemade gravy. And I can not stress this enough…The gravy MUST be homemade and use the drippings of the Chicken-Fried Steak. Anything else is grounds for deportation.

The waffle kicks the pancake’s ass every day and 73 times on Sunday. First off, it has about 100 little cups in it for holding your syrup. Second, a waffle is old school: You have to make one at a time. And as if a hot waffle loaded up with butter and syrup wasn’t good enough, someone, probably from Oakland, came up with the idea of throwing a piece of goddamn fried chicken on top. This man should be found and given a Nobel Prize for Awesomeness. 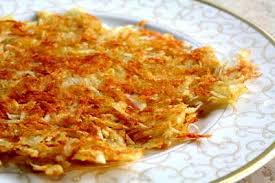 The ultimate breakfast side order. I like mine extra crispy and with a dash of salt. But you can do ANYTHING you want with hash browns. Cheese? Green onions? Ketchup? GRAVY? Hash browns are something for everyone. They are the 1998 Jay Buhner of breakfast foods.

7. Cream Of Wheat With Lumps And Brown Sugar

Yeah, everyone eats oatmeal because it’s supposed to be good for you, and people pretend to like grits due to some sense of Southern nostalgia that they have no tie to. But both of those are Single-A pikers compared to the Major League greatness of Cream Of Wheat with lumps and brown sugar. My mom was born and raised in North Carolina and I can count on zero fingers the number of times she made grits when I was growing up. But she made Cream Of Wheat like nobody’s business. And she taught me how to make the lumps in there that make it perfect. Add some brown sugar, and you’ve got the perfect lead-in for the last third of your lineup.

The best ones come from the least likely places. Like that truck outside the Home Depot.

Have you ever made Eggs Benedict, or its better, bacon-filled cousin, Eggs Blackstone? It’s as a labor intensive as clear-cutting a forest. But like a good No. 9 hitter, it’s usually worth the wait.

Because we’re all recovering from something.