(I originally posted a version of this to my Facebook page on Wednesday, Nov. 9, 2016. I have modified it for clarity and other minor grammatical issues here.)

During the past three days, since Trump’s election, it seems like half the country is saddened and depressed, and half feels vindicated because their voices were finally “heard”. That’s a hard dollar any day of the year, but it seems more so in these strange times.

With the mood of the country all over the place, I don’t know if all we’re doing now is just blustering. But, what I do know is this…

There was a time when we elected a president whose election spurred the literal tearing apart of this country. He would go on to be the greatest president this nation has ever seen. But, at the time, his election caused a third of the population to go to war in the hopes of not being part of this country anymore just because they thought he was such a threat to their lives and traditions. He spoke of it during his First Inaugural Address. Over four years, he would see 600,000 of his people die at the hands of each other. But he found a way to keep the promise of America alive, in spite of a national situation that made the election of Donald Trump look like a visit to Disneyland. Somehow, we got through that.

And we will get through this.

It may not be perfect over the next four years, but we will get through it. Maybe it will be as bad as many want to believe it will be. Then again, maybe President Trump will surprise us all? I have no idea what’s to come, and anyone who claims that things “will be” 100% as they imagine they will, well…There are about to be a lot of out-of-work pollsters who will be glad to talk to you about the folly of making predictions.

But…We have to get together and get through this. We have to because, What is the alternative? 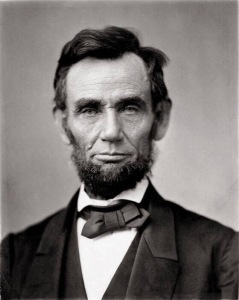 Be angry, if you must. Be sad. Be happy, if that’s your feeling. But let us find a way to not hurt each other. I don’t mean to support any political side here…I have friends here who loved Clinton and friends who loved Trump…And friends who hated them both. And I hope you won’t unfriend me, because, well, these are just the two cents of someone who hopes that we can all get up, brush ourselves off, and find a way to move forward, together.

If there was ever a time in our lifetimes to really take to heart the words of Abraham Lincoln, I think it is now.

“We are not enemies, but friends. We must not be enemies. Though passion may have strained, it must not break our bonds of affection. The mystic chords of memory, stretching from every battle-field and patriot grave to every living heart and hearthstone all over this broad land, will yet swell the chorus of the Union when again touched, as surely they will be, by the better angels of our nature.”

Adventures of a cyclist living in Lincoln City Oregon